The new skaters, from 5 years old to 14, came to Canada as government-assisted refugees 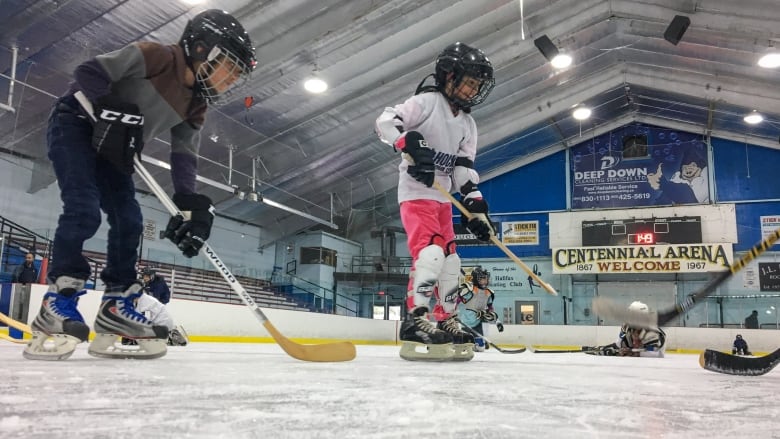 Players get their first taste of handling a hockey stick at Centennial Arena in Fairview. (Frances Willick/CBC)

For some, falling on the ice was the scary part of playing hockey.

For others, that was the fun part.

But it was, for better or for worse, an experience shared by most of the young immigrants who took to the ice for their first hockey practice on a recent Saturday afternoon in the Halifax area.

And it’s no wonder — many had never been on skates before. 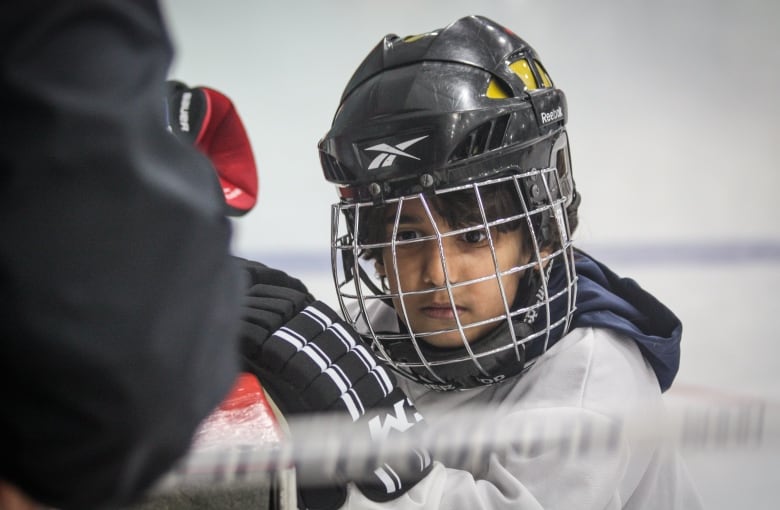 Some of the participants were a little apprehensive about hitting the ice. (Frances Willick/CBC)

“First-timers on the skates are usually on their knees trying to figure it all out. But every kid out there today was up moving around. It was like natural to them,” said Brad Taylor, Hockey Nova Scotia’s manager of development programs.

Hockey Nova Scotia dreamed up the idea of an ice hockey program for newcomer children a couple of years ago. The group managed to find donated equipment and line up ice time and coaches, and that’s where they passed the puck to the Immigrant Settlement Association of Nova Scotia (ISANS) to find the players.

Lani Poce, the community connections co-ordinator for ISANS, said it wasn’t a hard sell to get kids involved in the six-week program. All of the 36 participants, who range in age from five to 14, came to Canada as government-assisted refugees. 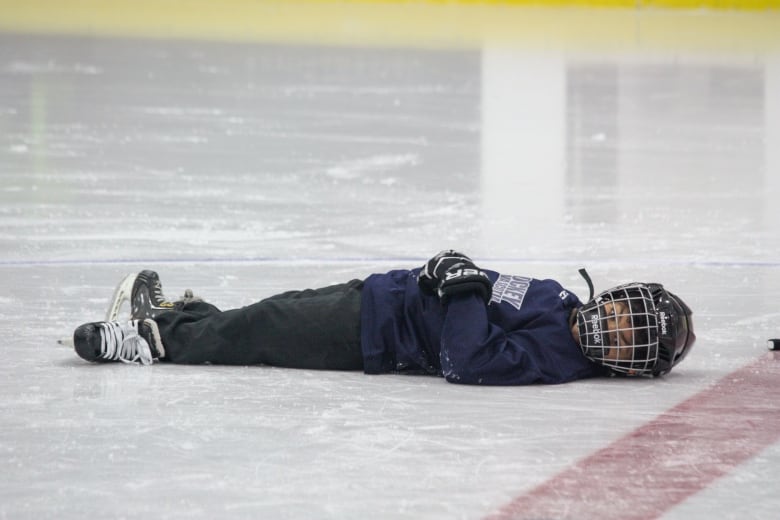 One of the hockey players takes a break on the ice. (Frances Willick/CBC)

Eight-year-old Mohammad Al-Rifaei’s favourite part of playing hockey was going “really, really, really fast” and then sliding on the ice, he said through an interpreter. 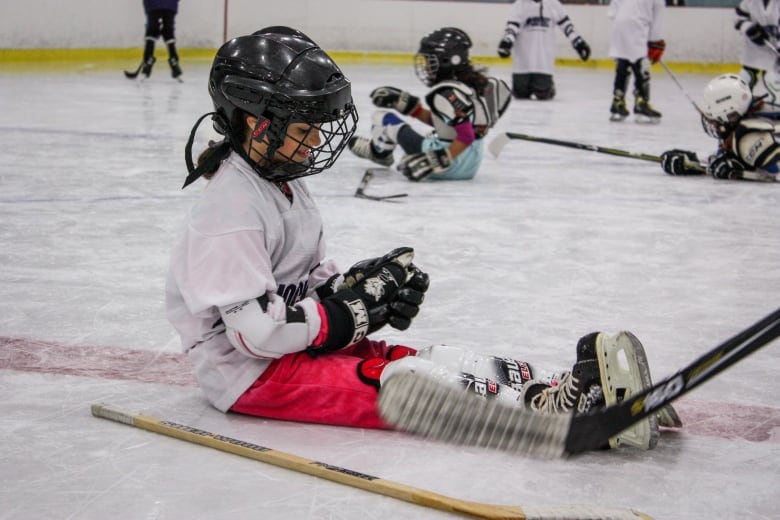 Program participants get to keep all the gear they’re given. (Frances Willick/CBC)

He and his 12-year-old brother, Nour, are originally from Syria and came to Canada about a year ago. Nour said he likes everything about hockey and plans to continue playing. Asked whether he plans to go pro and play with Sidney Crosby, he paused.

“Do you know who Sidney Crosby is?” he is asked.

He shakes his head. 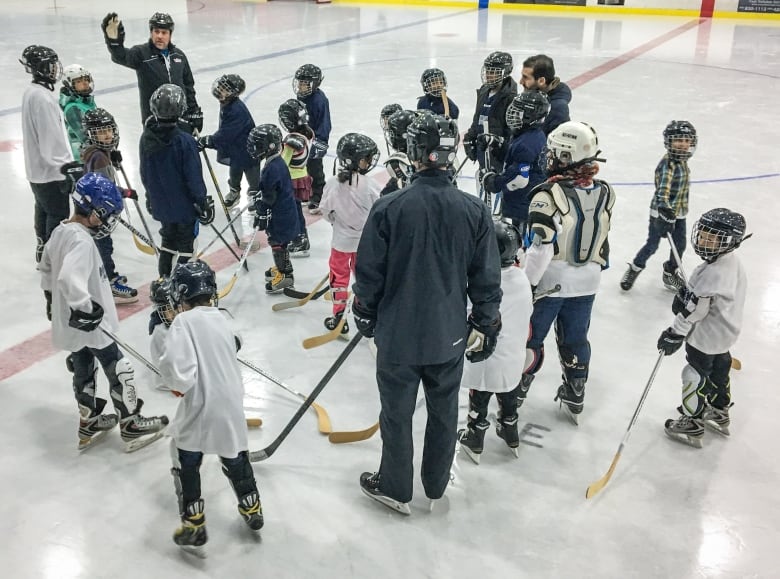 Eleven-year-old Arsema Gebregergi, from Ethiopia, didn’t quite get around to using a hockey stick at her first practice, but was focused instead on the skating.

“It was great but I was a little bit scared at first,” she said.

Many of the kids skated around the ice almost like veterans, some even tapping each other playfully with their sticks as they passed by. 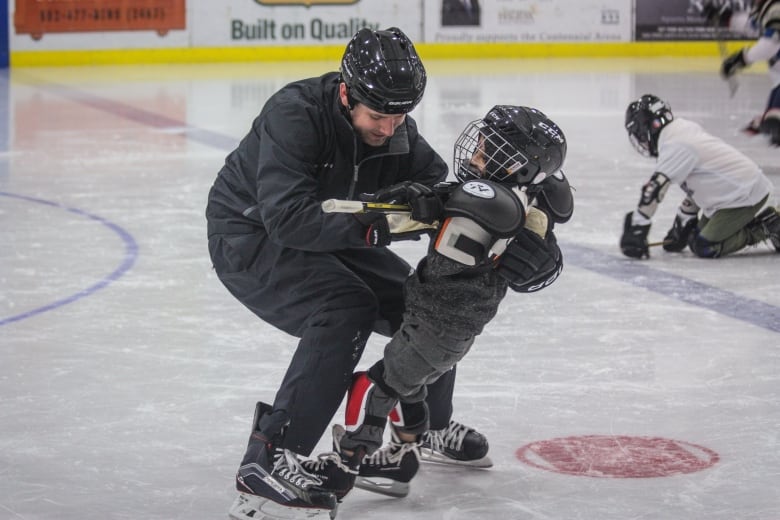 A coach helps one of the participants stay upright on the ice at Centennial Arena in Fairview. (Frances Willick/CBC)

Poce said helping organize the program, which is in its second year, is one of the best parts of her job.

“I know some of these families come from some pretty horrific situations and they don’t have the opportunity to be kids, or they haven’t within the last couple of years,” she said.

“So to see them here today, being out on the ice, having fun, their families smiling, everybody laughing and having a good time and kids just being kids, I think is awesome and it’s so important.”

As the ice-resurfacing machine chased the kids off the rink at the end of the hour, they filed into a locker room to take off their gear.

Posted in Get Settled and tagged Community Connections, refugees