It’s an old adage, one that volunteers confirm with every good deed: you get more than you give. And it holds particularly true for the Canadian response to the Syrian refugee crisis, the global catastrophe that sent millions to the brink of despair and death, and has shown the world just how compassionate humans can be.

Both the Canadians who led a humanitarian charge, and the Syrian newcomers who are becoming a part of their new country’s social fabric, have set the bar in building community. More and more, the stories of different groups helping each other have proven how it takes very little to be able to give back so much. Given the chance, Syrian refugees are paying it forward across the country.

By Jan. 31, 2018, Canada had received more than 51,000 Syrian refugees. The resettlement program that began in 2015 involved over 350 Canadian communities that welcomed Syrians who fled not just their war-torn country, but the often harsh conditions of displacement and overcrowded refugee camps. As Syrian families began to put down roots in every corner of the country, Canadian media reported a blizzard of heart-warming stories about the initiatives of ordinary citizens. Charities, community groups and outreach organizations were spearheading the welcome committees, but individuals were doing the heavy lifting to help Syrian refugees integrate into everyday Canadian society.

When the situation in Syria began to worsen in 2011, Sam Jisri felt compelled to fly from Mississauga to the borders of Turkey and Jordan to provide humanitarian and translation support. He had moved from Syria to Jordan as a toddler and then to Canada with his family as a teenager in the 1990s. In his new country, he founded a clothing store at 17, then a graphic design school in 2001, and with that same entrepreneurial spirit he was determined do something for his war-torn country of birth. 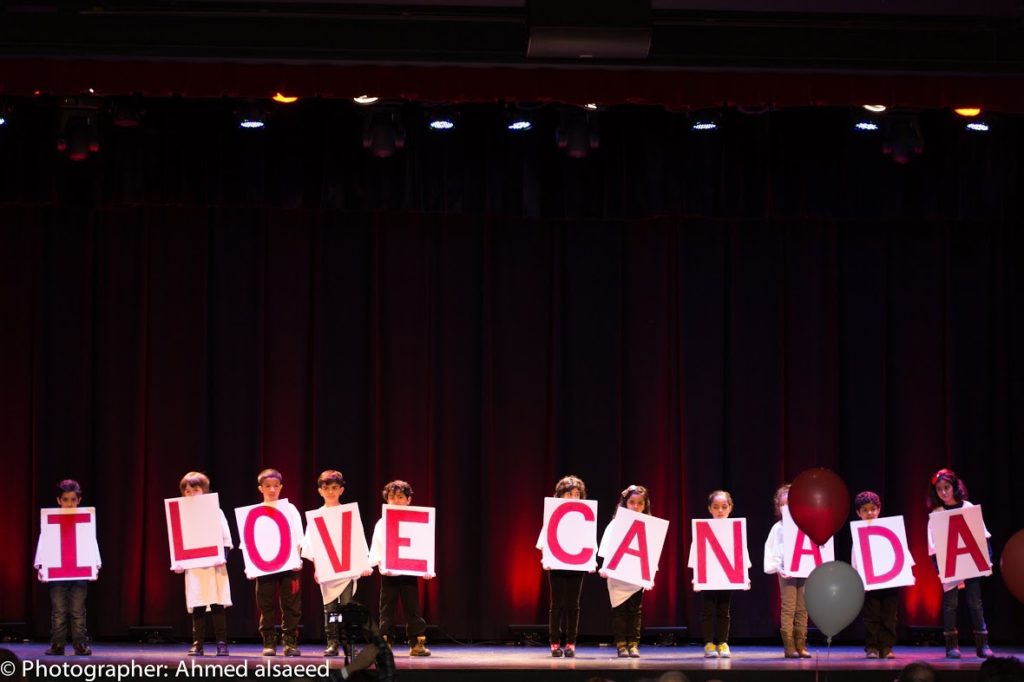 A few years later, the Liberal election promise in 2015 pledged to accept 25,000 refugees to Canada from Syria. “I thought to myself, maybe it will happen, maybe not,” said the married father of four. But, whatever would transpire, Jisri vowed that he would be ready if and when refugees began to arrive.

Jisri created the Syrian Active Volunteers (SAV) organization and hotline with friends and community members, to offer Arabic-English translations and advice to Syrian newcomers in the Greater Toronto Area. In December 2015, he found himself comforting and organizing 200 newly landed Syrians in the hallways of the Toronto Plaza Hotel where COSTI Immigration Services had begun their ambitious settlement process. It was both exhausting and incredibly exciting, recalls Jisri.

Now, his outreach organization is based at Hurontario and Dundas Streets, in the Syrian Community Centre, of which Jisri is the president. It houses a donation warehouse, a conference hall that seats 80, and a suite of offices that are used as classrooms. Newcomers aren’t just getting English lessons and computer courses, but are also learning how to give back to their new communities.

Just as newcomer children are incredibly quick at picking up English, so too are they naturals at becoming productive and caring members of society. “Kids are always excited, so with volunteering they are putting that energy in the right place,” says Jisri. “At the same time they are helping those in need.”

Jisri remembers being taken aback as a 14-year-old by the Canadian welcome his family received. “The people were majorly so very warm-hearted, so very generous,” he says. “We arrived in the winter, and on the first day our sidewalk was cleared by the Chinese neighbour. Why would they do that?” He laughs. “It shocked me.”

Nowadays, Jisri regularly gives talks about volunteering at SAV in Mississauga and at other speaking engagements around the country. Most of the 1,800 Syrian families SAV has helped are curious to know how they can volunteer, but also why it seems to be so common in Canada. “It means many things for different people at different ages,” he says.

Whether retirees who have paid their dues, or teens who are gaining experience while going to school full-time, they all feel a similar high from helping others. “Seniors remain active, socially and physically, and children who volunteer learn to give back and learn how to share,” says Jisri.

Syrians who wish to express gratitude for their hosts and their new country, have begun volunteering and giving back in many ways. 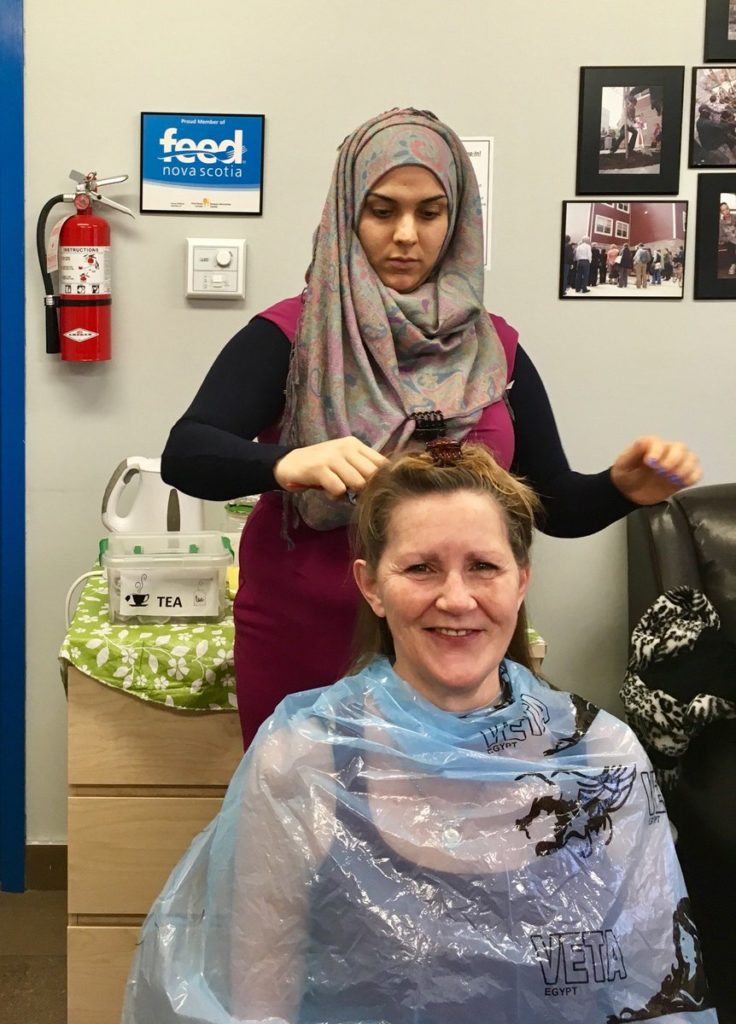 “All the kids who speak more than one language love to help translate,” says Ginny Twomey, a member of the National Association of Federal Retirees who volunteers at Winnipeg’s Newcomers Employment and Educational Development Services (N.E.E.D.S.) Centre. “The older kids are more than willing to help younger kids and to help one another, and they all really enjoy volunteering.”

Twomey, a former human resources manager, has worked with eager young newcomers in the N.E.E.D.S Centre’s pre-school program. It teaches youth still living in temporary housing how things operate in Canadian classrooms — just one of the many programs by this Manitoba outreach service for immigrants.

A similar organization in Halifax, the Immigrant Services Association of Nova Scotia (ISANS), has seen many of their clients offering up their time altruistically.

“I believe in giving back, it’s the main reason for this life,” says Aseel Ali, volunteer program coordinator at ISANS who came to Halifax in 2015. Originally from Iraq, Ali lived in Syria in 2014 and has worked in a variety of roles at ISANS, and since August of last year, she has worked as a volunteering coordinator. The response, she said, has been amazing. She hoped to enlist 40 volunteers among immigrants and newcomers but found over 100 willing to help with 13 different community partners such as Habitat for Humanity and the IWK Hospital for Children.

In Halifax, five Syrian hair dressers offer free haircuts every month at The Alders, a housing complex for homeless women, and four other women prepare lunch and dinner at the Adsum House women’s shelter. Sometimes the cooking group eats with the women at Adsum House, breaking bread and discussing what they liked about a new recipe they just made for the first time.

“They really like to give back to the community, and they improve their language and communication skills while they’re at it,” says Ali.

Last year, another Haligonian group cooked and delivered Syrian staples to Adsum House and four other shelters. The Syrian Thanksgiving Group of Nova Scotia, made up of eight refugees and two locals, wanted to express their thanks to their new community by sharing some of their culture amongst those in need.

The Syrian Student Society at Dalhousie University took another approach with the second annual Shokran (“Thank you”) Canada event they hosted in April, 2017. Held on campus, this Syrian cultural showcase featured traditional dances and food to raise funds for the Children’s Wish Foundation. Similar events have popped up all over, like the Ottawa Syrian Festival in February that featured dance, food and art. Here, artworks by Syrian children and students were auctioned off to fundraise for Canadian Blood Services and the Ottawa Inuit Children’s Centre.

The nation’s capital is where 20-year-old Noor Sakhniya became a youth facilitator for the Catholic Centre for Immigrants (CCI) in early 2017. Born in Aleppo, Sakhniya had been studying to be a commercial pilot in Florida for a year before he was denied a new visa in April 2016 at Ottawa’s American embassy.

“I didn’t know what to do,” he says. “After a time, I ran out of cash. I walked the streets, I stayed in the Ottawa Mosque, I went to the 24-hour Tim Horton’s.” By the end of the month, he realized he could claim protected person status, which he was awarded that November. He got part-time jobs at HomeSense and Loblaws and began volunteering at CCI just as the number of Syrian refugees arriving in Canada had reached 40,000.

Sakhniya regularly helps Syrian children participate in activities and field trips around Ottawa, and actively tries to teach them how good it feels to give back to their community.

“I think newcomers, and more specifically Syrian newcomers, want to say thank you, but sometimes it’s really hard to take the credit for that message if someone else is doing it for you,” he explains.

To organize a Syrian show of gratitude without the backing of a major settlement agency or community program, Sakhinya coordinated the first annual Syrian Canadian Donation Day in April, 2017, where hundreds of Syrian refugees donated blood in 10 major Canadian cities. It was all a part of an independent and inclusive way for Syrians to say thank you. 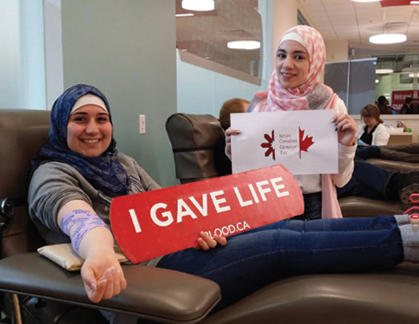 “Many newcomers told me, ‘we were living in camps, but actually we were not living we were just eating, drinking, and sleeping.’ They believe that Canadians gave them life and now it’s their turn to give them life.”

“As we create a new life in a new country, we sometimes forget about the previous difficulties and who helped us to get to where we are,” says Karen Molina, a youth coordinator for community connections at CCI. “But [Sakhniya] truly takes those to heart, and thinks ‘how do I give back?’ It’s almost as if he does it without meaning to.”

Sakhniya is also the VP of Youth Affairs at Ottawa’s Humans for Peace Institution and co-chair of Capital Welcomes. He hopes that Syrian Canadian Donation Day will become an annual event, to remember all of the sacrifices and efforts that Canada made for their Syrian cousins.

With the help of a City of Ottawa micro-grant, Sakhniya also plans to organize a reading program called Newcomer Reads. From July to November, newcomer children between the ages of 10 and 15 will be encouraged to read more books, to develop their English comprehension and increase the rate of literacy.

“I’m a person who believes in gratitude and that every good cause should be valued and supported,” he says, hoping that the expected 150 readers will want to also help their Syrian communities become more active.

“What Noor’s been able to accomplish in that short amount of time really is a testament to what Canada can do for newcomers,” says Molina. “He wants to be that beam of hope for the rest of us. He’s an example of what can be.”