NSCC campuses are integral hubs from one end of Nova Scotia to the other. They are intrinsically connected to communities, local businesses and service organizations and industries that hire their graduates.

The College is enhancing these relationships through Make Way — The Campaign for NSCC. The goal is to raise $25 million through the generosity of donors and partners, which will support student success across the province.

These connections are on full view at Akerley Campus in Dartmouth, where programs range from culinary and tourism, to metal fabrication, to heavy duty equipment repair.

One community connection at the campus was inspired by the arrival in recent years of Syria refugees to Nova Scotia. Gord MacKenzie, Academic Chair for Trades and Technology, wondered what the campus could do to welcome and support them. He reached out to the Immigrant Services Association of Nova Scotia (ISANS) for advice. They worked collaboratively, along with colleagues at the campus, to support customized training opportunities for several of the newcomers to Canada.

“We found three areas of skills development that could form the basis of customized training. These were construction, motive power and culinary arts — all aligned with training capabilities at Akerley and labour needs within our community,” says Gord.

Fadi Almouazzen is one of the Syrian refuges who participated in the four-week, customized training course. After fleeing Syria and spending five years in Jordan, the 21-year-old is now settled in Canada with his family and pursuing a career in auto mechanics.

“I love Canada. Having the chance to take the customized training course at NSCC introduced me to new skills and also to my love of this work,” Fadi says.

The program includes a range of training, from resumé and interview preparation to essential automotive industry skills.

That model is in keeping with other partnerships being forged across Nova Scotia through Make Way.

At Fairley and Stevens Ford in Dartmouth, Service Manager Shawn Noonan says the company’s connection to NSCC is very strong.

“We keep getting better students out of the College. Better students equal better apprentices and, in turn, better employees,” he explains. “At the end of the day, they produce, they’re efficient and they just do it right.”

Fairley and Stevens Ford funds an annual sponsorship for students in the automotive programs at Akerley Campus. The company also provides work-term opportunities to open the door to hands-on training for students. It donates used vehicle parts for students to work on in NSCC shops and frequently hires graduates in full-time positions.

“We’re fortunate in that all the students we’ve gotten have done quite well for us, so we want to give back to NSCC,” says Shawn. 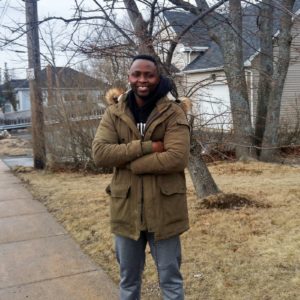 John Habiyaremye is learning new skills at NSCC and hopes to have a successful career in Power Engineering Technology. (CONTRIBUTED)

NSCC Akerley Campus student John Habiyaremye, driven by his love for his family, is motivated to do well in his program and launch a successful career in his field.

“I hope to get a good job so I am able to make enough money to bring my family members — who are still living in refugee camps in Africa — to Canada,” says the Power Engineering Technology student.

John was born in Rwanda in 1982. He escaped the genocide there and found shelter in refugee camps in Malawi. He eventually made his way to Canada and was granted citizenship in 2010.

Learning new theories and skills at NSCC each day is exciting, but his journey has been marked by financial challenges. He considers himself fortunate to have received financial aid made possible by Make Way — the Campaign for NSCC, in the form of a Harrison McCain helping Hand Bursary.

“This bursary really means a lot to me. Without it, I would have to work extra hours, and that is time I need to spend studying. Now I can focus more on school and my grades are actually higher than before,” says John.