More than 60 Syrian newcomers will be giving the ‘gift of life’ when they donate blood at a special blood donation event being held at Canadian Blood Services later this month in Halifax.

The event has been organized by Mohammad Harb, a Syrian man who came to Canada with his wife and family in 2016 as government-sponsored refugees, as part of Harb’s ongoing Shokran Canada project. “Shokran means ‘thank you’ in Arabic,” Harb explains.

“The people and the government of Canada gave us everything,” Harb says. “They gave us a chance at a new life. My wife and my children have safety and education now. I want to say ‘thank you’ to the Canadian people. To give blood is good; blood is priceless and it will help save Canadian people.”

Harb has registered the participants to donate blood. He has written out donation appointment cards and has created a WhatsApp message reminder with a locator map to send to each donor.

After escaping from their hometown of Dara’a in southern Syria in May 2013, Harb and his family went to Zaatari Refugee Camp, a dusty tent city just 12 kilometres across the Syria-Jordan border that housed as many as 150,000 refugees at its peak in 2013.

Harb and his family came to Halifax on Feb. 18, 2016. They arrived speaking only a few words of English, so once they had their accommodation settled, learning English became a top priority.

“It was very difficult at first. I study a lot. I study at many programs to support my language learning,” Harb says during an interview at Alderney Gate Public Library, where he takes part in a weekly English conversation group.

A self-described “good organizer,” Harb says he takes every opportunity — through language programs and everyday social situations — to improve his English. When Harb first began English classes, he was classified at a level one on the Canadian Language Benchmark. He is now at a level five and will soon be moving on to level six.

“Anywhere I go, I talk with people,” he says with a big grin.

Anywhere Harb goes, he also finds a way to bring people together. During his two years at Zaatari camp, he got a group of about 25 people of all ages to put on stage shows, most of which he wrote and directed.

“It was a way to tell our story and to help people have fun and relax, to feel better,” he says.

Just one month after arriving in Canada, Harb got busy organizing another performance — his first Shokran Canada event — which was held at the St. Andrew’s Community Centre in Halifax. More than two dozen Syrian families participated, bringing food to share and performing dances and songs from their culture. About 200 people attended, including Mayor Mike Savage and MLA and (now) Minister of Immigration Lena Diab.

“I first thought of doing this when we were staying at the Chocolate Lake Hotel, but they said to me: ‘Mohammad, wait until you have an apartment.’ I didn’t have any English then, but I just kept talking about my idea to everyone. I did not let that stop me,” Harb says.

The Best Western hotel served as accommodation headquarters for the hundreds of government-sponsored Syrian refugees who arrived in early 2016, with ISANS and YMCA staff and volunteers setting up temporary offices there to assist in the settlement process.

Last year, Harb organized his second Shokran Canada at Dalhousie University, featuring poetry, music and plenty of Syrian food. More than 600 people attended that event with money raised from the event going to Habitat for Humanity.

This year’s Shokran Canada event involves the blood drive as the first part of the thank you and the second part, which will include performances and food, happening at the Dalhousie Student Union Building on Friday, April 20, Harb says.

“I have a group of performers, all ages, and we are training every week for this event,” he says.

Money raised this year will be donated to the Children’s Wish Foundation. Harb and his family feel a special affinity to the organization after one of his children, 16-year-old Marwa, was granted her wish to go to Ottawa to meet Justin Trudeau and thank the prime minister in person for bringing her and her family to Canada. 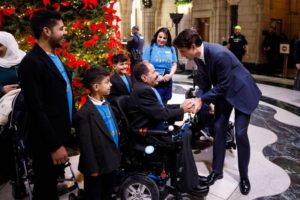 Mohammad Harb and his family got the chance to meet Prime Minister Justin Trudeau. Harb’s daughter, Marwa, was granted her wish to go to Ottawa to meet the prime minister and thank him in person for bringing her and her family to Canada. (CONTRIBUTED)

Like her 15-year-old brother Mahar and her father, Marwa has muscular dystrophy and uses a wheelchair to get around. She is an excellent student, her father says, adding that she volunteers at a dental clinic.

“My children all speak good English now. We are so grateful to Canada, for this life,” Harb says.